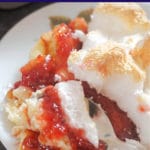 Queen of Puddings Recipe is a traditional British dessert with 3 delicious layers: the base is a bread custard, the middle layer is jam, and the topping is made with fluffy meringues. Such a simple dessert to make, but so amazing, this has been a family-favourite pudding for hundreds of years now.

Once you have a bite of this heavenly dessert you get why it's called queen of puddings. It really is the best pudding you can make with simple ingredients that won't break the bank, but it's posh enough to be served at special occasions too.

Bread puddings have been around for quite some time now, they are more than affordable and large amounts can be baked easily. Take this dessert, it can serve at least 6-8 people, possibly more if you don't go for seconds (or thirds). And trust me, the temptation is huge.

To make the base you only needs some breadcrumbs (fresh are the best, no need to buy them, just blitz up a few slices of bread), milk, eggs and sugar, and any flavouring of your choice: lemon zest or extract seems to be the popular choice, but vanilla, orange or rum can be use succesfully.

The preferred jams are either raspberry or blackberry, but really, just go with whatever you have around, no need to buy anything special just for this dessert. And the meringue is made with the egg whites left from the custard base. Easy, isn't it?

HOW TO MAKE THE QUEEN OF PUDDINGS RECIPE

As promised, this dessert is super easy to make even by complete beginners in the kitchen. Start with the custard base:

There isn't much that could go wrong with this recipe, apart from the custard not being baked for long enough, in which case it won't be set well, and the end product will be pretty messy.

So while the base is still slightly jiggly, a toothpick inserted in the middle should come out clean, and then you know that the eggs have been cooked properly.

For a finer look, a good piping bag fitted with a large nozzle does a great job, but if you don't have one, not to worry, you can cut the end of a freezer bag to decorate with the meringue. Lovely shiny meringue kisses do look pretty, but just decorate the way you can.

I would definitely add it to my afternoon tea menu, it really is the best pudding you can get. Bring on summer!

If you’ve liked the QUEEN OF PUDDINGS RECIPE or any other recipe on the blog then don’t forget to rate the recipe and let me know how you got on in the comments below, I love hearing from you! You can also FOLLOW ME on FACEBOOK, INSTAGRAM and PINTEREST to see more delicious food and what I’m getting up to.

Queen of Puddings Recipe is a traditional British dessert with 3 delicious layers: the base is a bread custard, the middle layer is jam, and the topping is made with fluffy meringues. Such a simple dessert to make, but so amazing, this has been a family-favourite pudding for hundreds of years now.
5 from 1 vote
Print Pin Rate
Course: Dessert
Cuisine: English
Prep Time: 10 minutes
Cook Time: 32 minutes
Cooling Time: 30 minutes
Total Time: 1 hour 12 minutes
Servings: 8 people
Calories: 284kcal
Author: Daniela Apostol

For the custard base

For the middle layer

For the meringue topping