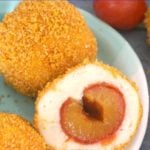 Plum Dumplings, a popular dessert across Eastern Europe. It is made with fresh ripe plums coated in a mashed potato dough and tossed into sweetened cinnamon breadcrumbs. A fantastic Fall recipe that goes well with the whole family.

These plum dumplings are made the Romanian way - although I am pretty sure the recipe is not too different in other Eastern European countries. The main ingredients are pretty much the same, but you can decide how much sugar goes into them.

If the plums are ripe and sweet, we shouldn't need too much refined sugar added to them, since more it's then added to the breadcrumbs anyway. It's quite an unusual dessert if you think about it, but it's really delicious, and once you make the recipe once, you'll fall in love with it.

Plums are at the their best in Autumn, and they are easily available from the end of August onwards. I mean, the real deal, those plums that actually taste the way they should taste, the juicy and ripe ones, not the supermarket kind of plums that can be found outside their season too.

Nah, those ones won't work, simply because they are not sweet enough for you to truly enjoy this dessert. And it really is a special dish. Let' see how to make it!

How to make plum dumplings

With desserts I'm pretty much always able to give an exact amount for each ingredient, but in this case, the amount of flour needed can vary. It depends on the kind of potatoes used, whether you boil them with their skin on or not, and also the type of flour. Hence why it's best to add about ⅔ of the flour first, and add more if necessary.

Note! Do not too much flour even if the dough is sticky, otherwise the dumplings will be quite tough.

It might sound complicated, but it really is a simple recipe. And again, the only worry is getting the dough to be the right consistency before boiling the dumplings, so that the dumplings are sweet and juicy on the inside, and tender (but still keeping the ball shape) on the outside.

If you’ve liked the PLUM DUMPLINGS or any other recipe on the blog then don’t forget to rate the recipe and let me know how you got on in the comments below, I love hearing from you! You can also FOLLOW ME on FACEBOOK, INSTAGRAM and PINTEREST to see more delicious food and what I’m getting up to. 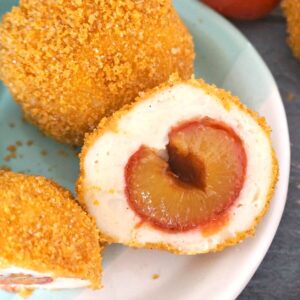