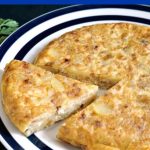 This Authentic Spanish Tortilla Recipe, the very famous Tortilla española is the most delicious potato omelette, and one of many amazing tapas that the Spanish cuisine is well known for.Great as a brunch or a light dinner, this Spanish tortilla is an absolute treat every single time.

A few basic ingredients like potatoes, eggs, onion and garlic are combined into a most satisfying dish that can be enjoyed pretty much any time of the day. Serve it as a hearty breakfast, brunch, appetizer or a meal on its own; you can never go wrong with a good old tortilla.

What is a Spanish tortilla

Although the term tortilla might create a some sort of confusion, this recipe has nothing to do with the Mexican wrap. It’s probably closer to the Italian fritatta, although usually tortilla is pan-fried rather than baked.I did try once to bake it, but l found that the taste was a tad less appealing, although l guess one may argue it was on the healthier side.

But basically, a spanish tortilla or tortilla de patata is a potato omelette that can have onions and garlic added, as a basic recipe, but anything else that takes your fancy, from bacon, chorizo or veggies.

Are usually appetizers or snacks that are very popular in Spain. Anything (super delicious) of a smaller-size portion could be considered a tapa, and they are usually served as a nibble before lunch or dinner.

Now, imagine what a party you could throw with some delicious tapas! Food like this makes me wish l visited Spain, l would probably eat there until l pop. So much to choose from!

The very first dishes that come to my mind when l think of the Spanish cuisine are paella and, of course, tortilla. Ah, and anything chorizo. But there are so many other delightful dishes that l should really cook more often.

I had the very first taste of a proper tortilla some years ago when l was living in London. My flatmate, Leticia, a lovely Spanish girl, made a fantastic tortilla and l knew the dish will be my favourite.

Once the omelette goes in the pan, again, add a tiny amount of oil. It will be tricky to turn it over using a plate if there’s lots of oil, you could end up burning your hands badly.

And that’s it, really, a real Spanish feast from the comfort of your own home. And a cheaper feast too! For a more traditional omelette recipe, how about my World’s Best Vegetarian Omelette? Or perhaps some nice and Healthy Egg Muffin Cups with Kale and Tomatoes?

If you’ve liked this Authentic Spanish Tortilla Recipe | Tortilla Española or any other recipe on the blog, then don’t forget to rate the recipe and let me know how you got on in the comments below, I love hearing from you! You can also FOLLOW ME on FACEBOOK, and PINTEREST to see more delicious food and what I’m getting up to.

Authentic Spanish tortilla recipe | Tortilla española os a delicious potato omelette, one of the very best Spanish tapas. Made with a few simple ingredients like potatoes, eggs, onion and garlic, this is a most satisfying dish that can be served either as a breakfast, appetizer ir a meal of its own.