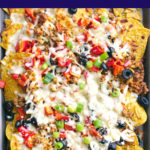 Ground Pork Nachos loaded with mozzarella cheese, olives, red peppers and spring onions, a fantastic party food recipe to feed a crowd. These nachos are not only insanely delicious, but healthy too. Bake in the oven for 5-10 minutes so that the cheese can melt nicely, and you get the best Game Day food. Great for any other celebration too!

Supermarkets usually have a large selection of party food, some cheaper than other, but there is no better food than the homemade one, and I am sure many agree with this. A nice bag of tortilla chips, some shredded mozzarella, perfectly cooked ground pork, some nice veggies, and you get something absolutely delicious.

And that with minimal prep. Once the pork mince is cooked, and that doesn't take long at all, all we have to do is assemble the nachos, and bake them in the oven for about 10 minutes or so until the cheese is nice and melted. And that's it, nothing complicated.

Now, with nachos there is always so much you can add. Make it as spicy as you like, or as mild, and go crazy over what meat or veggies to add, anything goes really. Pulled pork might be the popular choice, but ground beef can be as delicious. Let's see how to cook it!

Ground pork can be cooked in endless ways, but for this recipe we can keep it simple, there are lots of flavours there, and we want to get to taste them all.

And that's all, the ground pork is ready! Leave it to cool slightly before topping the tortilla chips with it, we don't want the nachos soggy!

How to assemble the nachos

Best way to bake the nachos is to spread tortilla chips out on a baking tray, in this way we can add lots of toppings. If you go for any other meat, make sure it's cooked beforehand, as it won't have time to cook in the oven.

Spread the pork over the chips, then add the chopped red peppers, sliced black onions, chilli peppers if you use any, shredded mozzarella cheese and bake. Top with spring onions once the nachos are out of the oven.

What to serve with nachos

To serve, you can either go for some good old sour cream, salsa, or guacamole. Or any other sauce of your choice, there is no rule here. On their own they are pretty amazing too! I would even try them with Black Olive Tapenade Recipe.

If you’ve tried these GROUND PORK NACHOS or any other recipe on the blog then don’t forget to rate the recipe and let me know how you got on in the comments below, I love hearing from you! You can also FOLLOW ME on FACEBOOK, and PINTEREST to see more delicious food and what I’m getting up to. 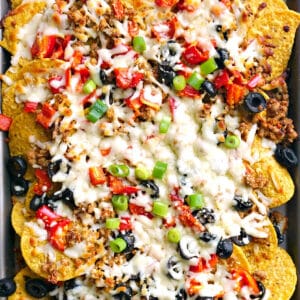 Ground Pork Nachos loaded with mozzarella cheese, olives, red peppers and spring onions, a fantastic party food recipe to feed a crowd. These nachos are not only insanely delicious, but healthy too. Bake in the oven for 5-10 minutes so that the cheese can melt nicely, and you get the best Game Day food. Great for any other celebration too! The ground pork is cooked with garlic and tomatoes, and it goes perfectly well with the tortilla chips.
5 from 2 votes
Print Pin Rate
Course: Appetizer
Cuisine: Mexican
Prep Time: 5 minutes
Cook Time: 25 minutes
Total Time: 30 minutes
Servings: 2 people
Calories: 1396kcal
Author: Daniela Apostol