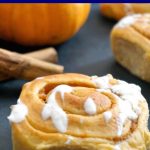 Pumpkin Cinnamon Rolls, a sweet treat for all the pumpkin lovers out there. Fall wouldn't be the same without pumpkins, and we must make the most of them before the season is over. A great choice for the Thanksgiving menu, or throughout the pumpkin season.

I don't know many people who aren't fans of the good old cinnamon rolls. I mean, what's not to like about them? Light, buttery, with a gorgeous icing, and lots of cinnamon, that sounds like the ideal dessert.

But how about we give this fabulous treat an autumn touch by adding pumpkin to the dough? The result is a decadent pumpkin cinnamon dessert that just screams perfection.

If you do have some leftover roasted pumpkin or the good old canned pumpkin, these amazing pumpkin and cinnamon rolls are a must bake. They are the perfect example why l love baking so much. You don't just see Fall everywhere, you get to taste it too. It might look like it's complicating, but baking them is actually easier than you think.

It might look like it's complicating, but baking them is actually easier than you think. Waiting around for the yeast to work its magic on the dough does take a bit of time, although once you kneaded the dough and let it prove, you can get on with something else.

How to prepare the yeast

The secret to making fluffy rolls is using good quality yeast. And to check if that is the case, you have to add it to lukewarm water together with a bit of sugar and flour and let it sit for about 10 minutes.

It should form a bubbly foam, meaning that the yeast is active and the dough will double its size the way it should. If after the 10 minutes the yeast does not look like in the right-hand side of the photo below, you have to try again from scratch.

I did once bake even if the yeast did not get foamy, l thought that shouldn't make such a big difference, but, guess what, it did. The dough didn't rise much, and the rolls ended up a bit dry, and nowhere near as fluffy. Lesson learnt! No skipping important steps in baking, shortcuts might work somewhere else, but not here.

How to make the dough

Now, you won't believe how little sugar you need for these pumpkin pie cinnamon rolls, since the pumpkin is naturally sweet, I personally don't add more than two tablespoons to the dough, and one tablespoon to the filling.

Fell free to add more if you like sweeter desserts, it's all up to personal preference. Especially if you use canned pumpkin, you might need to add a bit more sugar, I find that it's not as sweet as the oven roasted pumpkin puree.

How to make the filling

Once the dough has doubled its volume, roll it over your work surface, and spread the pumpkin mixture all over, making sure the edges are clear, so that you can roll the dough better.

Roll into a big sausage, then slice it into about 12 rolls, depending on the thickness of the slices. Arrange them on a baking tray lined with non-stick paper, and leave to proof for a second time to allow the rolls to fill up the space between them.

Bake in the preheated oven for 20-25 minutes at 170 degrees Celsius (340 Fahrenheit) until golden. Leave to cool, then drizzle the yogurt and milk mixture all over.

Like with most bakery products, the rolls need double proofing, once when the dough needs to double in volume, and second time after the rolls have been formed. You can add them to the baking tray, leaving a bit of space between each of them, they will fill that space, just let them sit again for about 30 minutes to one hour.

It all depends how warm is in the kitchen, l usually cover the dough bowl with clingfilm and then wrap it around in a kitchen towel, to make sure it keeps as warm as it can. They will rise further in the oven, but it's best to get them to rise as much as possible before as well.

All in all, this is a dessert I just love in Autumn time. Super easy to make, delicious, it goes well with the whole family, and, most importantly, it's got pumpkin!!! And, the good thing is that you can make these rolls in any other season too, the pumpkin can easily be replaced with sweet potatoes or even butternut squash, the difference in taste should not be great.

If you’ve liked my EASY PUMPKIN PIE CINNAMON ROLLS or any other recipe on the blog then don’t forget to rate the recipe and let me know how you got on in the comments below, I love hearing from you! You can also FOLLOW ME on FACEBOOK, INSTAGRAM and PINTEREST to see more delicious food and what I’m getting up to.

Pumpkin Cinnamon Rolls, a sweet treat for all the pumpkin lovers out there. Fall wouldn't be the same without pumpkins, and we must make the most of them before the season is over. A great choice for the Thanksgiving menu, or throughout the pumpkin season.
5 from 2 votes
Print Pin Rate
Course: Dessert
Cuisine: Romanian
Prep Time: 2 hours 20 minutes
Cook Time: 25 minutes
Total Time: 2 hours 45 minutes
Servings: 12 rolls
Calories: 139kcal
Author: Daniela Apostol